The project “Screaming Stones” took place on 21 July, 2015. It was about sound intervention in public space. When I had participated in a demonstration on Pariser Platz at the Brandenburg Gate before, I had seen the holes on the cobbled floor. Still today the stone is a symbol of the resistance whose have no weapon. I recorded the sound of some demonstrations into small sound devices. Then I have so worked some sponges that they look like stones and hided the sound device between them. If someone would step on the device, you could hear the recorded sound. I put the false stones in the gaps on the cobbled floor on Pariser Platz and wanted to watch what would happen. 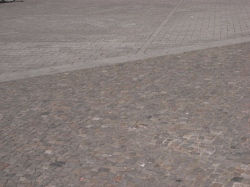